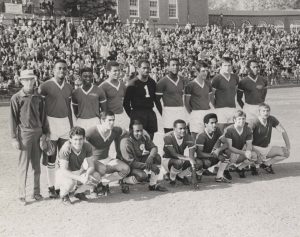 The late 60’s had become a busy period for me.  At the request of South American friends, I helped establish and then captain a rugby team soon to make a name for itself in the Washington region. Weekday evenings were often consumed by a wide range of theater projects, on or behind stage. Local success on the soccer field (called football in the rest of the world) had led to the offer of a professional contract with the Washington Darts. And, incidentally, I also had a full-time job with the World Bank.

Spread thin, I eventually had to make choices. This was made easier when the soccer team relocated to Miami.  I had joined the World Bank the same month as Robert McNamara and was most determined to outlast him.  My two-year contract with the Washington Darts expired, leaving me with more time on my hands and some great memories.  No greater memory than the visit of Santos FC (Brazil’s champion football club) in 1970 to RFK stadium to play the Washington Darts, the North American Soccer League (NASL) champions.

The Brazilian club came with solid history and the presence of their star player, the then thirty-year-old Pelé.  Not only was I getting to play on the same turf with the man, but I was also asked to perform another role. The league was not exactly splashing with cash, and Santos arrived with few administrative staff.  Pelé needed handling for the press and his English was very limited. Club management, not keen to spend more, picked out the World Bank guy with a smattering of Portuguese but fluent Spanish.  “That should work fine,” they said. 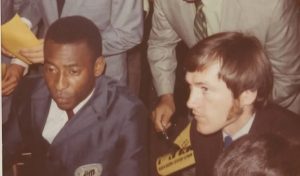 The author with Pelé, the global star

A perfect gentleman with nothing more than a mischievous smile if I faltered with nuances of translation, we spent wonderful moments together.  He was as unassuming in person as he was commanding on the pitch.  We talked about his youth, his personal triumphs and regrets and his wishes for the future.  He grew up in poverty and worked as a busboy in local teashops. He improvised using socks stuffed with newspapers to create a ball. Despite knowing that he was already regarded as a superstar, there was not the slightest element of smugness evident in his attitude.

For many, participation in contact sports requires a change in personality.  Courtesy does not work. Being ruthless does. Pelé, certainly no angel himself, although there seems to be no formal record of his ‘ejections’ from games, suffered from this in the 1966 World Cup.  Due to his reputation, he was targeted by opposition ‘hard men’, and literally kicked off the field and out of the competition. The uproar over this contributed to the introduction of the punitive yellow/red card system.  He mused about this with me, shrugged his shoulders, and suggested it was surely the price anyone must pay for being successful. 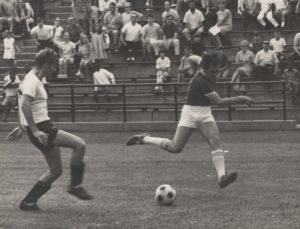 The author in action

The football match turned out to be a walk in the park for Santos. Pelé himself scored 4 goals. His gentleness off the pitch converted into physically powerful focus and relentless determination on it. That all disappeared when the final whistle blew. There was no gloating in post-match interviews. He had only respectful comments regarding the opposition.

Later, Pelé apologized to me personally for not having his game shirt to swap with me.  There had been other more formal requests for it. But he did give me his shorts, specifically designed to accommodate his narrow waist but enormous thighs.  He said with a chuckle that it was the shorts, not the shirt, that contained his most important weapons.

As we said our goodbyes, I looked him in the eye and asked, “Close to the end of the match, I nutmegged[1] you.  You let me do it, didn’t you?”  “Mister John” he replied, with a wry smile. “Would I ever do that?”

* The author retired in 2000 as Senior Advisor to the Director, GSD after 32 years at the World Bank.

[1] A soccer nutmeg is when the player possessing the ball tricks the defender and passes the ball between his legs. It’s a skill used mostly in soccer. The verb nutmegged is listed by the Oxford English Dictionary as “arising in the 1870s which in Victorian slang came to mean ‘to be tricked or deceived, especially in a manner which makes the victim look foolish’.”