THE UKRAINE TRAGEDY IS NOW GLOBAL: Impact on food security

On June 3, 2022, the 1818 Society Thematic Group on Agriculture and Rural Development (ARD TG) hosted a presentation on the impact of Russia’s invasion of Ukraine on food security. Presenters were David Laborde, Joe Glauber and Kibron Abay from the International Food Policy Research Institute (IFPRI) and Nadim Khouri, a World Bank alumnus and member of the ARD TG.

IFPRI’s research shows that: (i) Ukraine and Russia play a significant role in the global market for key sources of calories (see Graph 1 below); (ii) even before the Ukraine crisis, there were trends toward increased oilseed and grain prices because of increased demand (e.g. China), decreased supply (La Nina in most of South America, drought in the Middle East and North Africa (MENA), export restrictions in East-Asia); record low inventories in most grains (wheat, corn, soybean) even if rice inventories were at record highs; and rising production costs (labor, energy and fertilizers; (iii) Russia’s invasion of Ukraine exacerbated all these trends, leading to increased vulnerability of countries in African and in MENA especially and real risks of famine, malnutrition and social unrest because of country vulnerabilities. 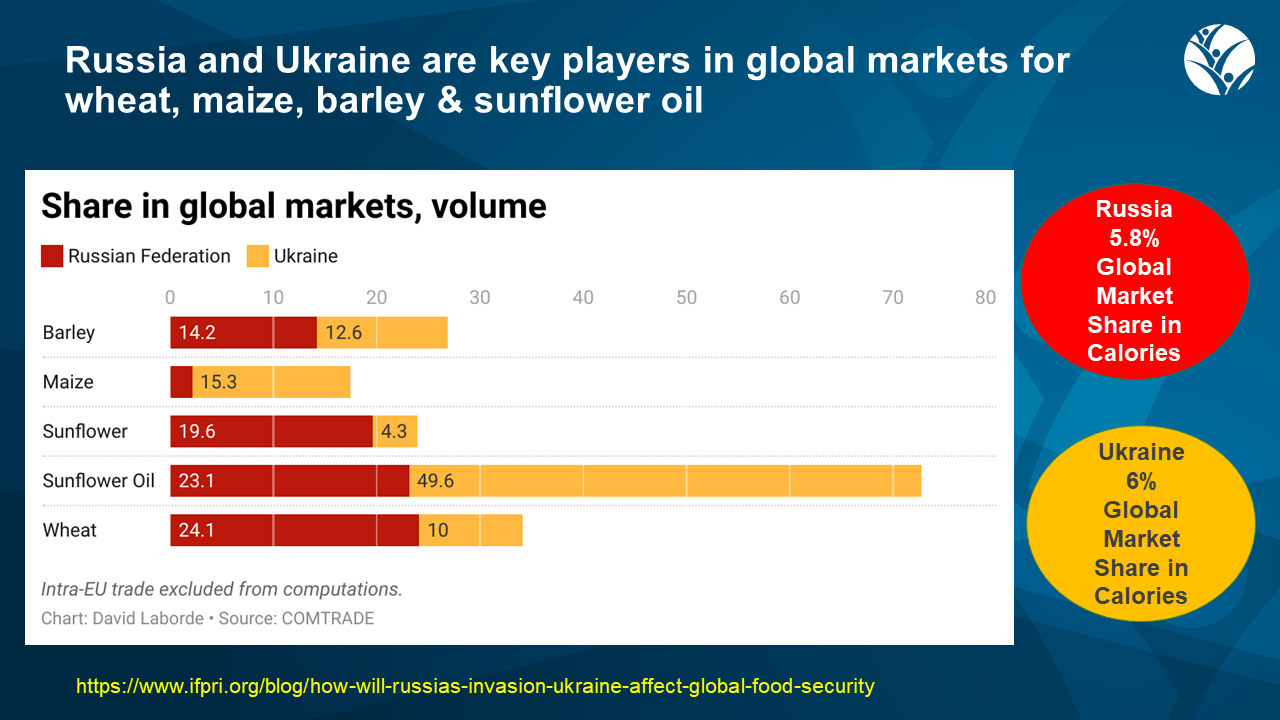 The IFPRI presentation included the discussion of particular vulnerabilities of MENA countries including Egypt, Sudan, Yemen and Lebanon. Collectively, the case studies show the dangers of the combined effects of national/local bad governance, direct exposure to Black Sea supply, high food import dependency, macroeconomic vulnerability, fertilizer import dependency, and local food import dynamics. [Click on the respective county names to see specific details.] Of the countries discussed, and perhaps globally, Yemen is the most affected by the accumulation of pre-existing conditions (its civil war, port embargo, etc.) on which the Ukraine crisis added more misery. As a result, (and back in April 2022) there was practically no area of Yemen that was not vulnerable to food insecurity (see IPC Map). The Integrated Food Security Phase Classification (IPC) is an innovative multi-partner initiative (originally developed in 2004 for use in Somalia) for improving food security and nutrition analysis and decision-making. By using the IPC classification and analytical approach, Governments, UN Agencies, NGOs, civil society and other relevant actors, work together to determine the severity and magnitude of acute and chronic food insecurity, and acute malnutrition situations in a country, according to internationally-recognised scientific standards. Click here to see more details on the method of classification of IPC acute food insecurity phases in Yemen.

Efforts for the longer-term reform of food security and food systems are well underway (e.g. https://www.un.org/en/food-systems-summit/dialogues). But the present emergency situation needs prompt actions that can yield almost immediate results. IFPRI, in their presentation, suggested a list of don’ts: don’t apply sanctions that further exacerbate global grain and food markets; don’t implement export restrictions; don’t encourage panic buying; don’t target subsidies to specific crops to “engineer” production outcomes; don’t cancel environmental initiatives without weighing long-term costs; and don’t promote unsustainable self-sufficiency policies and autarky strategies. With respect to the do’s, they included the following fast-action interventions at the global level: (i) consider removing biofuel subsidies and mandates; (ii) target social safety nets to the most needy; (iii) boost funding to WFP and other humanitarian programs; (iv) allow market prices to target producer and consumer decisions.
There was a lively discussion after the presentation that seemed to generate a consensus on the fact that there is potential, in most countries, for a sustainable increase in local food productions even if this does not reach the level of 100% self-sufficiency. The importance of open communication and sharing of data was highlighted, such as the critical role of the Agriculture Market Information System (AMIS) –. Perhaps the most important question is how to ensure that the UN system and global institutions are able to address conflicts in a serious way and prevent or reduce them. That was the original purpose of the global multilateral system of governance. It needs to be revived rather than vilified, so that this war stops immediately.

You already know that exercise is good for you.   Countless studies highlight the benefits of regular physical activity.  It prevents disease, improves …

Conservation of a World Heritage site (Abiseo Park) and public forest land in the Province of San Martin, Peruvian Amazon

We retired from the World Bank in 2006.  We purchased and currently own a farm located immediately next to Peru’s Rio Abiseo …

Who would have thought that after 30 years since the UN Convention on Climate Change, the gap between the agreed goals, and …

Recently I gave a webinar to an 1818 Society audience on my new book ‘Comity; Multilateralism in the New Cold War’, (Edward …