My trip to the Canadian Arctic Iqaluit, Nunavut, Canada

I wanted to go north to see how people live in the northern part of the North American continent under such harsh conditions. Like many people, growing up, I had been fascinated by the stories of Eskimos, people who are now called by their proper name of Inuit. I had always been fascinated 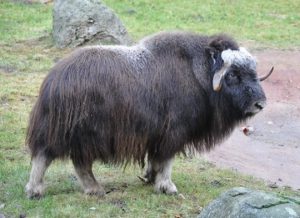 by the way they managed to survive in what must be one of the harshest climates on earth.

To take no chances I went by train to Ottawa the day before my flight, overnighting with my daughter Tanya. If anyone is thinking of doing this trip, be aware that it is a 3-hour flight from Ottawa which costs CDN $1400 for the return fare. From Montreal to Iqaluit, the return fare is CDN $3,600! No wonder there is not a lot of tourism here.

I was picked up by Francis Choquette. Francis had worked in the film industry with my brother-in-law Gilles and offered to help me during my stay here. Francis is 68 and married to an Inuit. They have four children.

Francis showed me around, introducing me to people at stores, restaurants, and the local museum. The population is mostly Inuit and are mostly English speaking. A small part of the population is francophone. Interestingly, there are quite a few Africans here.

Francis lent me an ATV which was a great hulking machine that goes anywhere. It had been years since I drove one and it took a while to get the hang of it. It was fun to use and with little traffic here, easily cruised up and down the hill. The Airbnb I stayed at was at the top of the hill looking down on the town and the ocean. The view was spectacular overlooking the town, and the bay and mountains on the other shore. But it was a 45-minute hike up the steep hill from the town.

On Tuesday afternoon, Francis announced that we would head out of town on our 2 quads, ATVs, and go to his backcountry cabin. He said it would take about an hour and that some of the trails would be rough, emphasizing that I should stop if it became too much. Even though the sun goes down at 11 pm, it never gets dark at this time of year. There is no rush to get back since there is no nightfall. The trip was so hard that I had to give up halfway.

I went into the Nunavut Legislative Assembly building, built in Scandinavian style with lots of wood and nice decorations. The assembly was not sitting so I could not visit the main room. As I was leaving, an important-looking white chap came in and was greeted by security. I asked him where I could get a flag of Nunavut. He asked me to wait and returned with a small Nunavut flag on a small desk stand which he gave me. Nice people.

On Thursday, I invited Francis and his charming wife Ruth to lunch at the Discovery Hotel. It was a privilege as I enjoyed meeting Ruth and hearing the story of how they met and married 39 years ago.

Thursday and Friday evenings, I went to the Alainait Arts Festival concerts. They played music popular with the Inuit including some hard rock. Not my favorite. One of the singers did some throat singing which was fun. It was attended by some 150 people, the school gym’s capacity. This is the same gym where the Pope will be pontificating when he spends 3 hours in Iqaluit on his way back to Rome on July 29. I cannot say there was a lot of excitement in the city about the visit, in part since most people in Iqaluit are Anglicans…

On Friday morning, I mounted my quad beast and set 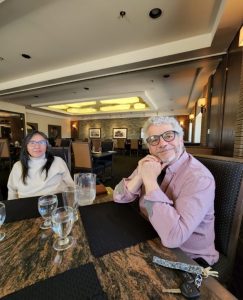 out on my own to explore the mountains. I decided to visit lake Geraldine, located on the top of the highest mountain, which supplies the city water to Iqaluit. The approaches to the lake were blocked as they do not want people messing with their only water supply. The views of the city and the bay were stunning from atop the mountain.

We started off Saturday morning having breakfast at Brian’s Brew restaurant. Brian is a cancer survivor and a supporter of worthy causes in the city. He is anglo and comes from Lasalle in Montreal. Francis claims that Brian’s pizzas are the best in the country.

Francis loves his north and in the brief time I spent there, I started to understand how people can become attached to living there. There is truth in the expression that you can take the man out of the North, but you cannot take the North out of the man. Francis’ life proves that.

This is an abbreviated version of my full blog. To see the full text and pictures of this trip, go to:
https://sandersblog.blogspot.com/2022/07/my-travels-to-canadian-arctic-july-2022.html
If you have questions or comments, please contact me at: Akeyserlingk@gmail.com

The late 60’s had become a busy period for me.  At the request of South American friends, I helped establish and then captain …