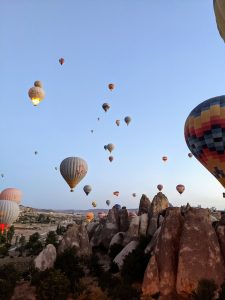 One morning before the crack of dawn, we stumbled bleary-eyed from our cave hotel, to be taken to the hot air balloon starting point in Cappadocia. The dark sky was lit up by the fires of over 100 hot air balloons. We climbed into our allotted compartment in the basket, were briefed by the captain on the position to take in case of a bad landing, and before we realized it we were already floating up in the air. It’s the most thrilling feeling looking over the edge of the basket at the ground below and at the horizon where the sun was just starting to rise. The scenery below is amazing, dotted with “fairy chimneys” and caves. Bridal couples and instagram influencers posed on the rocks as the balloons floated past. Seeing the sky slowly turning pink as the sun rose over Mount Argeus, an extinct volcano, was breathtaking.

All too soon we were back on earth, guided down so carefully by a team pulling on the guy ropes that we touched down lightly onto the flatbed of a truck. Then, we were handed our “certificates of flight”, drank a toast in “champagne”, before setting off back to the cave hotel for breakfast.

At this point in the trip, we had spent time in Istanbul, then flown east to Sanliurfa, driven more centrally to Gaziantep and Cappadocia before flying to Izmir and then to Ephesus. In Istanbul, we climbed up the Galata Tower from where we could see across and around the whole city. We had fun trying to identify the Hagia Sofia and the Blue Mosque, when, at least to me, the minarets all look the same. As well as visiting both mosques, we went to the Jewish Museum and Neve Shalom Synagogue. The Jewish Museum showed, with simple graphics, the migration of Jews from the Spanish Inquisition to Europe and to Turkey where they were welcomed and made to feel at home.

Selection of brunch dishes to be shared by 4 people!

Along the way, we stopped in a village home where we cooked cheese borek and meat manti (tiny dumplings served in soup) in a village home. In another village home, we watched as the women made grape molasses over a fire, baked round breads in a tandoor oven, and made baklava – all of which we ate with relish! The village women were so hospitable and kind, sharing their homes and their home-grown produce with us and then serving us the foods they’d helped us prepare. It was inspiring to learn from the local people and a different way of learning about another culture and country.

Another highlight was the culinary museum in Gaziantep (a UNESCO culinary heritage site), followed later that evening by dinner at the culinary school restaurant. Also in Gaziantep, we had the most amazing and delicious brunch at Orkide Patisserie (see photo) where the spread of dishes were to be shared by 4 people – and was followed by even more delicacies. 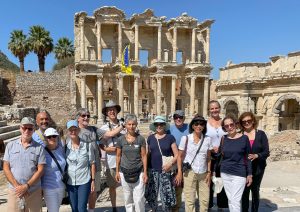 “Sample the delights of Türkiye” promised experiences both culinary and cultural as well as historical. We ate amazing food, learned to cook in Turkish homes, and walked many miles up and down cobblestone streets and stairs as we followed our guide through the various cities and villages on the trip – although not a hiking trip, some renamed the trip “food and fitness” and felt it was just as well that we walked so much because we ate so much as well!

All too soon it was time to return to Istanbul and fly home. There is so much to see and do in Türkiye that I, for one, am planning to return for more!