Conservation of a World Heritage site (Abiseo Park) and public forest land in the Province of San Martin, Peruvian Amazon

BY KEVIN CLEAVER AND MARIA NIKOLOV

We retired from the World Bank in 2006.  We purchased and currently own a farm located immediately next to Peru’s Rio Abiseo National Park.  This Park is one of three World Heritage sites in Peru, though less well known than Macchu Picchu.  It is in the Province of San Martin, on the slopes of the Andes mountains, and in the Amazon basin watershed.

Our lodge is family owned (the Nikolov-Cleaver family).  It is located at 500 meters above sea level.  The only access is by boat; no roads nor foot paths lead there.

In addition to our 20-acre farm we have a concession from the government to conserve a large area of public forest land (about 4400 acres), including parts of Abiseo Park. Our guests can visit the entire concession as well as the park and forest land.  The concession requires that we undertake all efforts required to preserve the park and the forest area surrounding the Park.  Revenue from our tourist and farming activities enables us to pay for some of the conservation activities in the park and in the forest, and to support park services.  The reason that the Peruvian government has provided such concessions is its inability to effectively manage parks and public forest land from the depredation of farmers, poachers, illegal loggers and miners.  As in Brazil, the Peruvian Amazon is being destroyed. 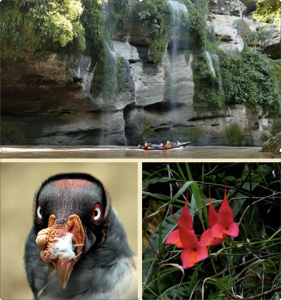 Flora and fauna in the park

The Rio Abiseo National Park covers an area of more than 2500 square kilometers, and has a range of elevation from 350 meters to 4000 meters.  UNESCO declared it a World Heritage Site for Culture and Nature in 1990.  Exploration undertaken since 1985 has uncovered 36 previously unknown archeological sites all of which are pre-INCA.

The Park contains a wide diversity of flora and fauna including mountain forest, tropical forest, rain forest, high altitude pasture and dry forests.  An inventory of vegetation in the high-altitude zones of the park identified more than 1000 species of plants, including 174 varieties of ferns (17% of all species of ferns which exist in Peru), 72 species of orchids, and 2 species of trees which are near extinction.

An inventory of animals in the park identified 300 species of mammals, amphibious, reptiles and fish.  18 of these species are considered at risk of extinction, while 12 species were discovered recently and are new to science.  The Park contains rare animals such as the yellow tail monkey, the Andean bear, and 5 species of sloths.

Since 1986, the park has been closed to tourism, unless special permission is obtained, due to the fragile nature of the ecosystem.  Our company, Abiseo Aventura Paradise has special permission to enter the park, which it has obtained due to the special concession requiring it to undertake strict conservation and protection measures.  Government agents supervise us to ensure that we respect the plan. 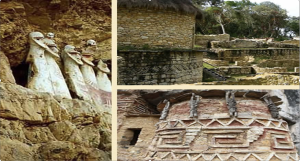 Archaeological sites in the park

We have not taken donations for our conservation activities, choosing to fund these activities on a modest level based on income generated from tourism and farming, and our own family contributions.  However, continued incursions by illegal loggers, farmers, and mining operations are progressively destroying the public forests and are beginning to encroach on the park.  The Peruvian government contributes some resources to the park through their park service.  In the past, the World Wildlife Fund has supported the park as has the Global Environmental Fund (GEF) and German bilateral aid.  These resources have now dried up.

We have engaged local communities in the area to assist with conservation, but these activities have met with resistance.  Some members of the local communities engage in poaching, illegal logging, and forest destruction for the purpose of subsistence farming.  Some however have cooperated when benefitting from tourism.  The covid pandemic exacerbated the problems by limiting tourism, and limiting alternative employment possibilities.  The result is increased depredation of the forest. The picture on the left (below), we took on our concession after an an illegal logger chopped up some public forest land.  The picture on the right was taken outside our concession.  In it the illegal logger burned the remaining vegetation in order to clear land for cultivation.  We are able to stop the cultivation because that requires a longer term stay by the squatter.  The illegal logging and poaching are more difficult to stop.

What is the solution to these destructive practices?  Local efforts such as ours slow down the destruction but cannot eliminate it. Solutions require genuine government commitment to fund its park and forest service, enforce its environmental protection laws which are good in Peru, but rarely enforced, better community organization by Peruvians interested in conservation, inclusion in Peru’s education system of serious environmental content, and frankly a more effective government.