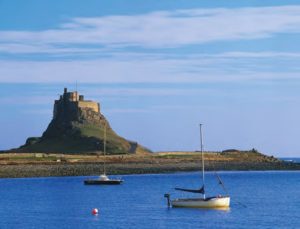 Way back in July 2019, 30 some 1818 hikers and partners spent a week hiking in the Cotswolds. It was such a success, at the end of the week, the group decided to hike again in the UK the following summer.  We chose Northumberland, an area of great beauty and rich history, with close proximity to Hadrian’s Wall, Holy Island, the Farne Islands and numerous castles.

Some 30 members, paid their deposits and prepared.  The rest is history, but three years and countless emails later, in  July 2022, the walk happened.  More than 20 of the original group had persisted; sadly, four other original group members were thwarted by last minute plane cancellations and late arrival of passports.   But, some 30 of us arrived in Nether Grange Country House in Alnmouth, run by a great English institution, HF Holidays. This began as a Christian Holiday Friendship organization to help factory workers in the late 1870’s visit the countryside, Now its better known as ‘Husband Finder’ holidays. 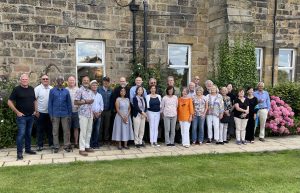 The 18th century hotel is in the centre of the quiet harbour village of Alnmouth, on the beach and with stunning views of the North Sea coastline.  With 5 hike leaders for some 40 walkers – two cultural Sightseeing & Walking groups and 3 hike leaders for the various daily walks (options of easy, medium and hard). From the house, the different groups walked  various coastal cliff paths and inland in the  Northumberland National Park and Penines.  Highlights of the week included walking an ancient pilgrim’s path over the sands to Lindisfarne (Holy Island) –  the setting for the birth of Christianity in England and its romantic castle. Walking a stretch of Hadrian’s wall, in extremely strong winds, and ending with a visit to the Roman fort of Vindolanda, still an active archaeological site. 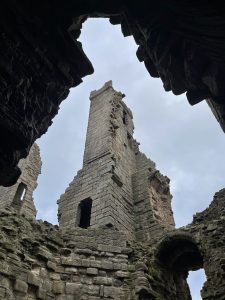 Given the numerous Scottish invasions over the centuries, the rebellious nature of the Northumbrians, not to forget the Viking raids, there are more castles with lurid histories per square mile in Northumberland than any other part of the UK.  So, many of the group walked to the medieval market town of Alnwick and its castle (better known as the Harry Potter Castle), the atmospheric ruins of Dunstanburgh Castle, the massive Bamburgh Castle, and Warkworth castle with its eight towers.   Some took a boat tour of the Farne Islands, spectacular bird sanctuary islands, with thousands and thousands of puffins, kittiwakes and terns nesting. Sadly, it was not possible to land and walk amongst the birds due to an outbreak of avian flu.

What was perhaps the most memorable part of the week for me, was listening to all our colleagues talking about their work and life in the Bank. Clearly, the week was enjoyed by all.

The hotel and staff were amazing, the food also. And, at pretty reasonable cost, the entire group seemed keen to repeat the week next year.  After the time and effort in this, I was not so keen, but we will walk again with HF Holidays in their St Ives, Cornwall Hotel in June 2024.  Besides great hikes, the area offers Tintagel Castle (of King Arthur fame), St. Ives Tate, the Eden project – and of course, its Poldark and Dr. Martin country.