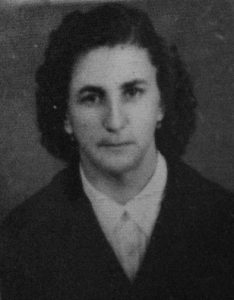 I never met my mother.  She died of breast cancer when I was one year old.  Throughout my life, I learned what she was like and how she managed to raise four kids while working with my dad in his business.

With the holidays approaching, and with the launch of the Community Connections Campaign (CCC), I think about the people who have inspired me to donate and volunteer towards important causes such as this one.  Over the years working at the World Bank Group (WBG) and serving as a CCC volunteer, I had the privilege to meet and support several colleagues and friends while they were dealing with challenges such as leukemia, HIV/AIDS and different types of cancers.  At the same time my thoughts always returned to:  Mrs. Francisca Bernardinetti Silvero, a 42-year-old, who died of breast cancer and left four children behind, one of them, a baby.

One of my mom’s greatest passions was to help others.  Our house was like a Bed and Breakfast, always full of relatives and friends who were not in good shape and needed a place to live and be cared for, and boy, was she good at that!  Every year, in July, she and my dad organized the participation of a group of cyclists to ride 160 kilometers to another town and, at the end of the ride, pray for prosperity, health, and peace.  Those pilgrimages are known as “Romarias” in Brazil. 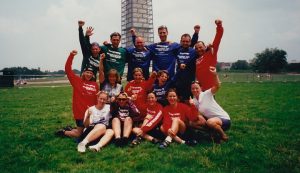 I can see the influence my mom had on what really matters to me and makes me feel alive:  community and sports events.  In 1999 I helped create a team of WBG cyclists who committed to ride 350 miles from Raleigh, North Carolina to Washington, DC in 4 days to raise money to benefit Whitman Walker Clinic and Food and Friends (two major non-profits that support HIV/AIDS patients).  In those days, HIV/AIDS was a considered a death sentence, but I like to think that our team made a big difference not only in fundraising but also in bringing awareness of the disease.  We organized all sorts of activities to raise money (bread and Thanksgiving pies were my favorite).  We even met with Jim Wolfensohn in his office and he gave us a big check! We participated in the AIDS Ride for 3 consecutive years, took lots of Advil and ice baths, and it was worth every second of it.  This team of athletes and friends are still close to my heart and some are amongst my closet friends. 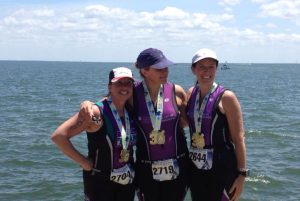 Years later, while looking for similar events, I heard about Team in Training, another combination of sports — this time a triathlon (swim, bike and run) which  fundraises for the Leukemia and Lymphoma Society.  When I first met the organizers, I knew I was home even though I had never done a triathlon before and knew nothing about blood cancers.

The Leukemia and Lymphoma Society supports almost 90% of blood cancer treatments today and Team in Training is one of its main sources of fundraising.  The organizers and mentors are the most caring and loving people on this planet.  Participants also include survivors and people who have had loved ones affected by the disease. One of these participants turned out to be a very close friend of mine who was diagnosed with lymphoma right after we completed a ½ Ironman (70.6-mile triathlon) in North Carolina.  I am glad to say that she is in remission after nine years and is in top shape!  As for myself, I ended up not doing one triathlon but more than ten and I plan to do many more.

Giving, participating, and donating my time has deeply connected me to others and brought joy, health and prosperity to my life. It has also connected me with the woman I never got to meet but whose legacy of giving continues through me.