The Bank’s first review of its expenses in relation to lending, conducted in 1955, centered on three graphs illustrating the record of expenses and operations back to its startup. The graphs, updated in original format over the history of the institution, are presented below (click to expand), followed by commentary with historical perspective.

Bank Expenses and Lending Since 1946 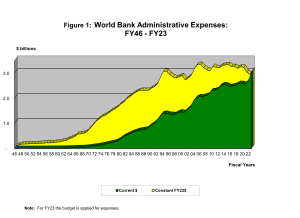 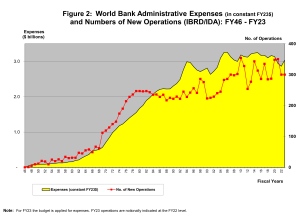 Figure 2 plots Net Administrative Expenses as estimated in constant FY23 dollars against numbers of new IBRD/IDA operations (i.e., new lending projects by fiscal year excluding supplements or additions to projects approved in prior years). This figure has not to my knowledge been published or in the public domain since 2015; for periods since then it is based on my own count of new projects and review of project descriptions. 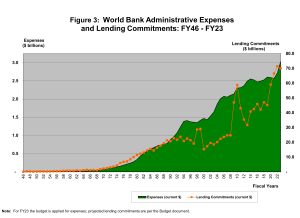 A key finding with regard to recent history is that the Bank has exercised moderation in budgeting over the past two decades. Net administrative expenses expressed in constant dollars (i.e., adjusted for the estimated impacts of inflation) are at about the same level as 15 years ago, notwithstanding some peaks and valleys, while IBRD/IDA lending reached new highs in the past two fiscal years. Note: The decrease in expenses in real terms in FY21-22 largely reflects the reduction in travel due to Covid.

Looking at the long term, interpretation of the graphs has to be highly qualified with respect to the originally intended purpose of the series as primary cost-efficiency indicators. Bank operational work has of course evolved terrifically in scope and diversity, methodology and technology, and (decreased) relative cost of lending preparation and supervision since the founding of the organization. In particular, in viewing the long-term trend of expenses in relation to amounts of lending by fiscal year, a number of developments that are not evident from the graphs should be noted as follows.

The time-recording system used to gauge the amounts of staff time and other resources devoted to the gamut of Bank operational and support functions has been operating since the early 1970s. The record indicates that the costs of Bank lending activity per se (i.e., project preparation and supervision) decreased as a percentage of total Bank expenses from roughly 45% in the 1980s to as low as 20% in FY12. (Current data on trends among the organization’s Business Activities (formerly called Programs) are not in the public domain, but I would expect the figure has since risen some, together with recent increases in lending). What had occurred in the interim? To start, a new array of operational Business Activities emerged and expanded, including Knowledge Management, External Partnerships and Outreach, Resource Mobilization, and Quality Assurance.

Funding for the new or expanded non-lending operational activities was partly availed through a second development that took effect beginning in the 1990s: reduced time and costs of lending preparation and supervision made possible by operating efficiencies from modern information, analytical and communication technologies. (Some readers will recall the days when Bank reports had to be shipped to country offices in large sacks.) Further, decentralization and outsourcing, in tandem with technical innovation, were engaged in an ongoing effort to contain or reduce costs of work across the gamut of Bank activities, that further contributed to budget restraint. Finally, other measures of cost control, such as increased fee income and reimbursables as partial offsets to increasing overhead expenses, and reductions in certain staff benefit costs, are also credited with the budget control exercised over the past quarter century.

In 2014, at a time of very low inflation, the Bank adopted a more nominal budgeting approach (i.e., determining budgets without separate or any automatic adjustments for inflation). Documentation and indexing of administrative expense price inflators over multiyear periods were discontinued. To update the historical budget price index for the impact of inflation since then, I have applied dated Board-approved methodology to retrospectively estimate annual inflation impacts on Bank expenses.

The late 60’s had become a busy period for me.  At the request of South American friends, I helped establish and then captain …